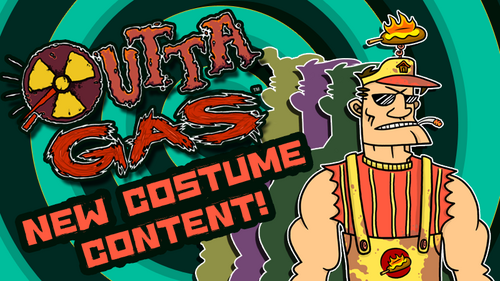 New content out today that brings some style to the wasteland! Also includes a ton of updates, quality of life improvements, and bug fixes.

What's this? A beaten-up wardrobe has appeared in Cuddles' tire patch! Look inside its musty depths to access Jack's new costume selection.

But, wait - it's empty? Of course! What, you think you'd just be given new threads without putting in any work? Think again, sphincter face!

Hidden around the wasteland are new costumes for you to find. So get out there and use those eyeballs of yours! Then, return to the wardrobe and dress Jack up to add more edge (or more embarrassment) to his persona.

Have fun adding some style to your slaughter! :)
-Trevor

New Content:
--Costumes added for Jack! After finding one, interact with the beat-up wardrobe in the gas station map to try it on and bring some style back to the wasteland! (Note: Jack is contractually obligated to change back to his original party tux during all cutscenes.)

Other:
--Crates now break a little faster to allow for smoother interaction. Speedrun world record now in jeopardy! ;)
--Bonus food items now show with ‘FREE’ as price instead of ‘0’